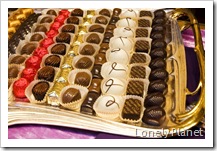 This bustling night market is a  kaleidoscopic food zoo of all the Chinese food you could wish to try (with plenty of critters-on-a-stick you might not care for, into the bargain). For the squeamish, there are lamb kebabs, beef and chicken skewers, corn on the cob, noodles and candied fruit kebabs. For those harder-of-stomach, how about smelly tofu, or deep-fried and skewered creepy crawlies such as grasshoppers, scorpions, silkworms and centipedes? For many it might be a case of look but don’t dare to buy, but the photo opportunities are outstanding. Dozens of stalls are set up here each evening (from about 5.30pm); vendors’ signs are generally in Mandarin and English.

Want fancier fare? Head to nearby Courtyard for fusion cuisine and one of Beijing’s best wine lists. 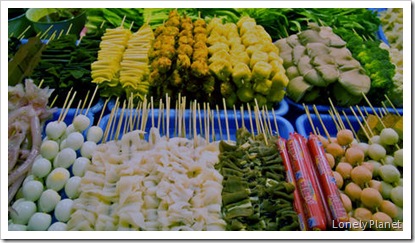 It’s not only the incredible beauty of the walled Tuscan town of San Gimignano that will cause your heart to soar. Stop by the Gelateria di Piazza and your taste buds will applaud… As the pictures on the wall attest, many celebs have wrapped their lips around one of the gelateria’s rich ice creams (‘all the family thought the ice cream was delicious’ attested one Tony Blair). Master Sergio uses only the choicest ingredients: pistachios from Sicily and cocoa from Venezuela. There are plenty of the traditional flavours, but you’ll be tempted by unusual combinations such as rosemary-scented raspberry, or pink grapefruit and sparkling wine.

Give your appetite another thrill at the town’s Museo del Vino (Wine Museum), where you can taste some of the choice local white wines. 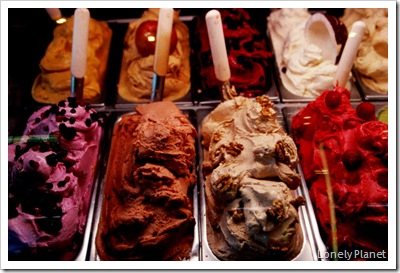 If grocery shopping normally bores you to tears, prepare to be stunned. The exquisitely presented chocolates, pastries, tins of biscuits, fruit and veg, seafood, cheeses, wines and other enticing edibles in this glorious food store within Le Bon Marché department store are a sight to behold (for our money, this beats the Mona Lisa). There are downsides to visiting this shrine to fine food, however. The first: no suitcase (or budget) will be big enough for all that you wish to buy and take home. The second: returning to your neighbourhood supermarket after visiting Le Grand Epicerie will likely reduce you to tears.

You’re not too far from the Jardin du Luxembourg, so snaffle some supplies and dine alfresco in one of the city’s most beloved parks. 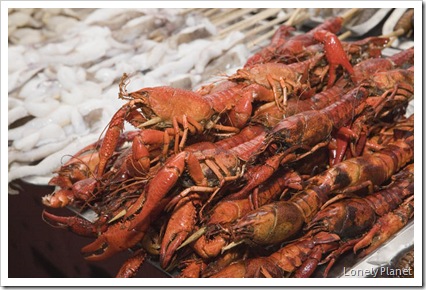 Come for the tuna auctions, stay for the sushi breakfast. After it’s been fished from the sea and before it turns up on a sashimi platter, most of Tokyo’s seafood transits through Tsukiji Market. This gigantic pulsating hub of Tokyo’s gastronomic system pumps at a frenetic pace. Workers yell, slice blocks of ice, haul massive bluefin tuna, spit, stop for a smoke, laugh, bone an eel and yell some more. You’ll have to trundle out here early to see the predawn arrival of fish and its wholesale auctioning (when visitors are permitted), but even at around 7am there’s still some good market bustle and seafood-slinging going on.

Lines are unavoidable at Daiwa Sushi, Tsukiji’s famed sushi bar (open from 5am). The sushi sets are a good bet if you’re not comfortable ordering in Japanese. 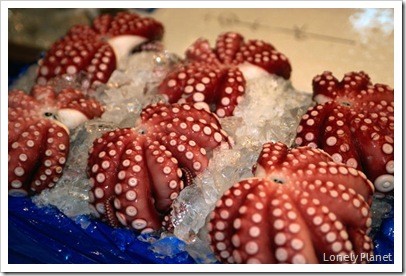 Belgium produces a dreamy 220,000 tonnes of chocolate per year. Its unmatched reputation for sublime chocolate derives from the silky smooth texture created by extended conching (stirring) during the production process, and from the use of pure cocoa butter. A turning point for Belgian chocolate came in 1912, when pralines (filled chocolates) were born in Brussels. On that city’s magnificent Grand Place, La Maison des Maîtres Chocolatiers Belges unites 10 of the country’s choco-craftsmen in an upmarket boutique that also offers demonstrations in English (and the all-important taste-tests) at 4pm Saturday and Sunday.

Also stop by a Pierre Marcolini store – his innovative choc-creations are a top choice for Belgium’s wealthy and fashion conscious. 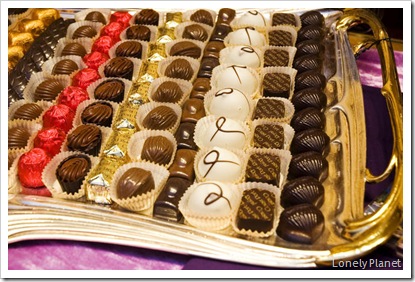 It’ll start on the train there (or indeed, any train in India) – the nasal call of the chai wallahs pacing the platforms, hawking their masala-spiced nectar. But that’s nothing compared to Darjeeling itself. Once you switch to the narrow-gauge steam train that hauls you up to this 2000m hill station you’re surrounded by the stuff : tea in the cafes, tea in the bazaars and a deep-green leafy profusion of tea cascading down the hillsides, with the might of the Himalaya behind.

Between March and November (picking and processing season) take a plantation tour and marvel at what goes into a humble tea bag. Of course, high tea is in order – take it at the Elgin or  Windermere hotels. Shop for tea at Nathmull’s Tea Room. 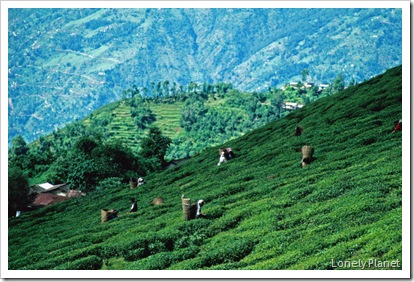 Although somewhat tainted by tourist creep, this market can easily transport you back to its Ottomanera heyday with the kaleidoscopic colours of its mounds of saffron, sumac, chilli and salça (tomato paste), its herbal teas and lokum (Turkish delight), and enough aphrodisiac remedies to make even a sultan blush. As well as baharat (spices), nuts and honey in the comb, there are truckloads of incir (figs) and pestil(fruit pressed into sheets and dried). This is a regular shopping spot for the city’s best chefs.

Don’t be afraid to do as the locals do – try before you buy, and compare prices. If you’re in need of more sustenance than a market snack, Bab-i Hayat is a beautiful vaulted space over the eastern entrance to the bazaar. 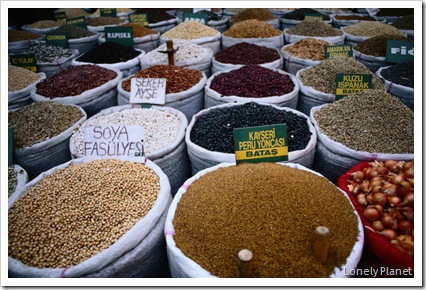 Épernay, the capitale du champagne and home to many of the world’s most celebrated champagne houses, is the best place for touring cellars and sampling bubbly. The most popular champagne brand in France, Mercier, has thrived on unabashed self-promotion since it was founded in 1858 by Eugène Mercier, a trailblazer in the field of eye-catching publicity stunts and the virtual creator of the cellar tour. Everything here is flashy, including the 160,000L barrel that took two decades to build, the lift that transports you 30m underground, and the train taking you along part of the 18km of champagne cellars.

Stay in style at Le Clos Raymi, once occupied by Monsieur Chandon (of champagne fame). 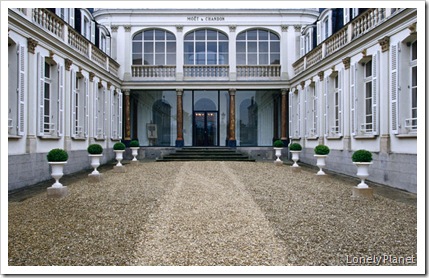 In the heart of rural southern France, the village of Roquefort turns ewes’ milk into France’s most famous cheese. Its steep, narrow streets lead to natural caves, where seven producers ripen 22,000 tonnes of Roquefort each year – and some cheesemakers offer tours. La Société, established in 1842, has one-hour tours of its pungent caves (including tasters). It’s now the largest Roquefort producer, churning out 70% of the world’s supply. And did you know that the mouldy blue-green veins that run through Roquefort cheese are, in fact, the spores of microscopic mushrooms, cultivated on leavened bread? Er, yum.

Roquefort is a parking nightmare; it’s better to leave your car beside the tourist office at the main, western entry to the village and walk in. 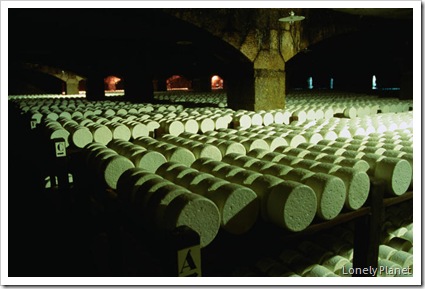 The tuber magnatum pico (white truffle) reigns supreme at the medieval hilltop town of San Miniato, roughly halfway between Pisa and Florence. The woods around here are famed throughout Italy as prime truffle-hunting grounds, and mid-September to December is when all the action takes place. The best way to enjoy it is via the town’s white-truffle market, held on the last three weekends of November. During the festival, restaurateurs and truffle tragics come from every corner of the globe to purchase supplies, sample truffle-based delicacies in the town’s shops and restaurants, and breathe in one of the world’s most distinctive aromas.

From October to December, join a truffle hunt with Barbialla Nuovo Fattoria, an agritourism estate. 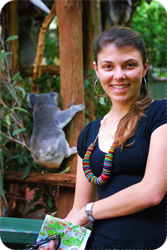 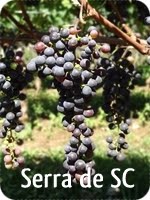 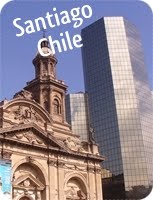 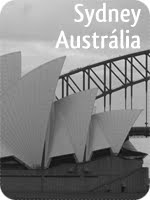 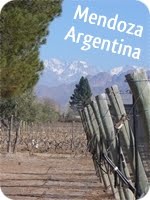